Moles (Nevi) are common.  Almost every adult has a few of them.  Adults who have light skin often have more moles.  They may have 10 to 40 moles on their skin.  This is normal.

Most moles appear on the skin during childhood and adolescence.  Moles will grow as the child (or teen) grows.  Some moles will darken, and others will lighten.  These changes are expected and seldom a sign of melanoma. 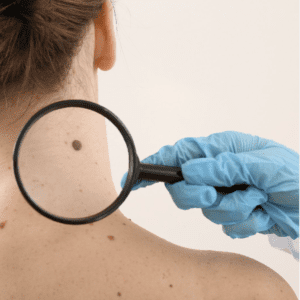 A mole on your body usually has these characteristics:

Although moles have a distinct look, they may not look alike.  Even in the same person, moles can differ in size, shape, or color.  Moles can have hair.  Some moles will change slowly over time, possibly even disappearing.

It is also important to know that moles can appear anywhere on the skin.  They can develop on your scalp, between your fingers and toes, on the soles and palms, and even under your nails.

For adults, new moles and changes to existing moles can be a sign of melanoma.  Caught early, melanoma is highly treatable.

Look for the ABCDE’s of mole monitoring: